Killer is the (former) secondary antagonist of All Dogs Go To Heaven, the television show, and the Christmas special. He is one of Charlie B. Barkin's best friends and Carface Carruthers' best friend and former henchman.

All Dogs Go to Heaven

After finding out that Charlie is back, Killer tells Carface. Killer is later seen in the shadows planning Charlie's death with Carface's other henchmen. He assist Carface in Charlie's death by getting him (and himself) drunk at the Mardi Gras, blindfolds the drunken Charlie, and helps his boss run him over with a car and off the docks.

Later, when after Charlie and Itchy find out the "monster" in his basement is an adorable little girl who speaks to animals, Carface enters the room with Killer. She asked Carface if she can go outside to which Carface said that she can if she talked to the rat who was in the cage next to her. She gently asked the rat who will win the rat race to which Carface bets on. When Carface tells Killer to feed the girl and leaves without another word, she reminded Carface that he said she can go outside only to be responded by the closing of the door leaving her all alone.

Killer apparently comes back to feed her only to find her missing. He informs Carface of her departure which leaves him furious. Abusing and throwing things at Killer, he claims, "I love that girl.... I... want... her... now!" Killer goes into hysterics over Carface's fury.

Killer is not anyone's idea of a henchman as his name doesn't actually make what he is, he is bumbling, neurotic, spineless, nerdy, and is less evil compared to Carface. And he is also known as kind-hearted, ingenious, loyal, level-headed, educated, respectful, knowledgeable, independent, lion-hearted (sometimes), laid-back, encouraging and responsible. He & Itchy are quite similar as they are always getting dragged into crazy schemes by their bosses (Charlie & Carface, respectively). But compared to Itchy, Killer has it harder, as Carface often mistreated, under-appreciated, and basically blamed him for things that backfired. But despite the abuse, Killer remains loyal to Carface.

On the other hand, Killer is not always a bad guy, as he pushes Anne-Marie to safety, he works with Itchy to get separated from a chain ("Sidekicked"), and he (along with Carface) stops Belladonna's evil plot near the end of the finale.

Killer is an American Schnoodle with light tan fur, bushy ears and tail. He also wears a pair of oversized glasses along with a spiked collar. Killer's waist down and back legs are plump, while his torso and front legs are thin.

Killer is Carface's weak-willed sidekick. There are numerous times where he fails Carface and got reprimanded or even threatened to be killed for them. Nevertheless, he remained loyal to Carface until his death in the original film. 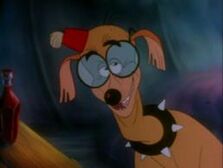 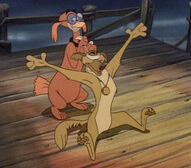 Add a photo to this gallery

Retrieved from "https://alldogsgotoheaven.fandom.com/wiki/Killer?oldid=12278"
Community content is available under CC-BY-SA unless otherwise noted.